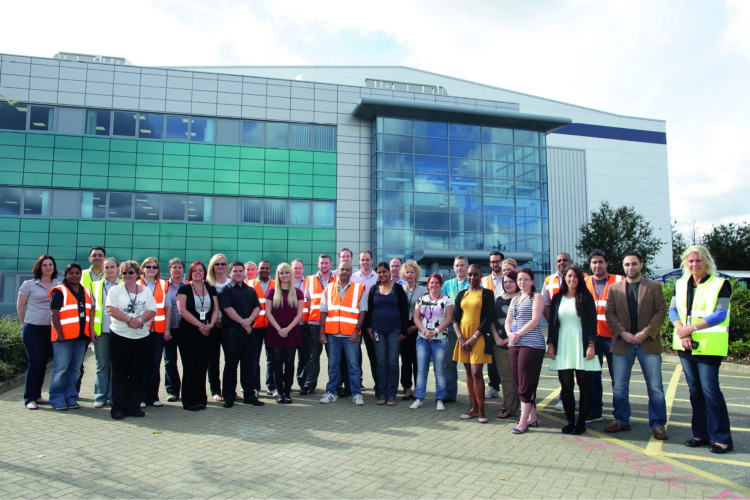 London, UK, 14 September 2012 – Sony today officially opened its newly built UK distribution centre in Enfield, North London – a provider of around a quarter of the UK’s home entertainment media­ – after the original building was destroyed by fire during the London riots in Summer 2011. The opening was attended by Prime Minister, David Cameron, who praised Sony for its efforts in retaining local employees through utilising the original site. The new, more advanced distribution centre was built against all odds in record time in order to be fully operational with stock for the peak Christmas sales period which accounts for 50% of annual revenue. It is operated by Sony’s global subsidiary Sony DADC, a leading production and distribution supplier of CD, DVD, Blu-ray Disc and digital media products for the international content industry.

Speaking at the opening of the new site David Cameron said, “The riots last summer were devastating for many local communities and the businesses within them.  I’ve heard today how upsetting it was for the employees here at Sony DADC to see the building they had worked in – some of them for many years – reduced to rubble.  But I want to commend Sony for seeing this as an opportunity to rebuild an even better facility and for protecting the jobs of those employed here while they did it.  The fantastic new distribution centre I’ve seen can handle more orders and has created the potential for more jobs in the area.  I’m delighted to be here to wish Sony well as they move back to their home in Enfield today.”

Around 25% of Britain’s total stock of home entertainment discs (like CD, DVD and Blu-ray Disc) was destroyed by the fire, which could have had a devastating effect on retailers as well as major and independent rights holders. “Thanks to the dedication of our employees, contractors, suppliers and customers we have managed to pull off the impossible and re-establish our business in time for our busiest trading period and kept alive the businesses that depend on our services.” said Natasha Tyrrell, General Manager Distribution at Sony DADC UK who has spearheaded the recovery and development strategy.

“We are incredibly proud of the team in Enfield and of the ambitious re-build project, which together, we have made a huge success. Our main aim in this past year has been to continue to service our customers to our full potential and retain our skilled local workforce”, added Tyrrell, “This is a significant investment for us and demonstrates our commitment to developing our business despite an increasingly challenging environment in the packaged media (CD, DVD, Blu-ray Disc) industry. Capitalising on the skills of our employees, our cross-section of customers in the entertainment industries of home video, music, games and software and our ability to adapt our services, means we are in an excellent position to drive new business.”

“It was the fastest ever build of its type in the UK with an overall construction and fit out period of 23 weeks. This enabled the site to become fully operational after just 11 months following the devastation caused by the arson attack”, stated the principle contractor ISG Retail. The new complex is 6.6 feet (two meters) higher than its predecessor, contains three office floors (one more floor than previously) stretching over 326,000 square feet (30,286 sqm) and incorporates high technology investment such as 4th generation conveyor and warehouse management systems. Especially recognising the need for top-level security, the Enfield site has adopted a new security concept that will increase the protection of staff, customer goods and the premises.

The new distribution centre provides a peak throughput capability of approximately 1.2M units and can currently cater for around 55,000 titles per day, shipped to 20,000 retail addresses all over the UK and Ireland. As with the previous distribution centre, the service portfolio consists of physical handling and packing, testing and verification, distribution planning as well as financial services. Now, with an increasing focus on offering B2C distribution and retail services in addition to B2B services, Sony DADC is well equipped to accommodate an expanding product and services portfolio, future-proofing itself against an evolving industry. The UK distribution centre is part of Sony DADC’s global network that comprises approximately 30 sites in 19 countries worldwide.

About Sony
Offering an integrated entertainment experience through its electronics, mobile, music, pictures, game and the Sony Entertainment Network, Sony is uniquely positioned to be one of the world’s leading consumer brands. Sony is renowned for its audio-visual products in both the consumer and professional markets, such as the BRAVIA™ LCD high-definition (HD) television, Cyber-shot™ digital camera, Handycam® camcorder, “α” (pronounced Alpha) digital SLR camera, Xperia™ Tablet and Walkman® MP3 player as well as its VAIO™ personal computers and 3D HD professional broadcast equipment.